I don’t know who wrote the text for the dialog for changing Keyboard shortcuts in Ubuntu 11.10, but wow could they have been more misleading. 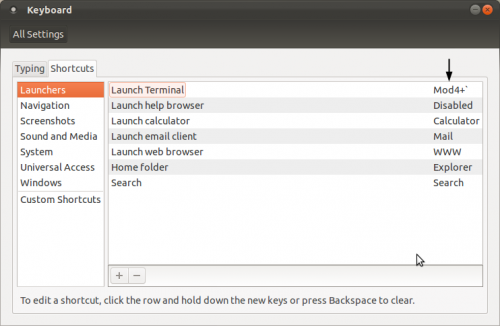 The instructions read, “click the row and hold down the new keys,” in reality the only place that will allow you to change the short cut is to click the text directly under the black arrow in the above image. I spent the better part of 20 minutes trying to figure out why I couldn’t change a keyboard shortcut because the directions are utterly useless.

This should probably also be filed under: Won’t file a bug report as it’s too much bloody work, and now I won’t forget how to do it.

Enough With the Updates Already

If there’s one thing I’m really starting to get tired of, it’s software updates. It doesn’t seem like a day goes by when something doesn’t need to be updated. Sure, I could probably get away without updating as much, but given the security of most applications and the fact that most software updates are at least partially security related not applying them seems like asking for trouble.

There has to be a better way.

If there’s one thing that some/most Linux distributions get right it’s updates. Yes, it’s a little annoying that ever time I log into my Ubuntu server it says there are updates. However, at the same time, the list of necessary updates covers everything I’ve installed—at least so long as I installed it from an apt repository.

Windows on the other hand is a comparative mess. Microsoft products update though Windows/Microsoft update, 3rd party programs need to roll their own update mechanism.

Things like Adobe’s Flash player, quite possibly one of the worst security offenders, are their own little special hell. Flash seemingly only seems to check for or at least try to apply updates when you first boot your computer; which means my system that sleeps nightly and is only restarted for OS updates that require a restart—yes, Windows 7 is that stable that multi-week uptimes are not only possible but should be routine—doesn’t prompt about Flash updates virtually ever. Morever, since Firefox, Chrome, and Internet Explorer all use different installers, it’s not just a simple one click update it’s a multi-stage process including downloading the installer twice.

Then there’s the other stuff. Like Wordpress. Updated recently to 3.3. Which I might add is really quite nice compared to 3.2, though since switching to Nginx most of the egregious Wordpress performance issues have at least been mitigated.

Wordpress’s built in upgrade system is nice, when it works, but even that I’m not sure goes far enough. It’s annoying as hell to upgrade Wordpress. Then the themes. Then the pluings. Then have the updater come back and say that more plugins have updates. Why can’t I click “Update everything” and confirm it and have Wordpress update everything that has an outstanding update available?

Then again, the problem isn’t Wordpress, Windows or Linux, it’s the lack of a real software engineering standards and short deadlines aimed at maximizing profits regardless of the expense it causes to the consumers.

This is painfully obvious when you start looking at games. When I got Deus Ex: Human Revolution a couple of weeks ago the first thing it did after installing 8.something gigs of game files, is spend 30 minutes downloading a couple hundred meg patch.

Skyrim is even worse, in fact it’s to the point that I’m glad I didn’t buy it when it was released because so far it’s been an epic cluster fsck of updates and patches, some that actually broke more than they fixed.

I don’t know what the solution is, or if there even is one, but I do know this. I’m freaking tired of updates, and even more tired of software that’s written shoddily in the first place, because it can be updated later.